Faced with the new threat of a Soviet long range bomber attack aimed at American soil, the USAF requested design proposals from US Airplane Companies for an supersonic interceptor able to reach an altitude of 50,000 ft in four minutes, that could be in service by 1954. On September 11, 1951 Convair's proposal, the YF-102A was chosen for the program named the “1954 Interceptor”. Based on the first powered delta winged aircraft, the XF-92A, the Delta Dagger became the Worlds first delta winged combat aircraft, the first all weather Interceptor capable of supersonic speeds in level flight, and the first aircraft designed with an all missile armament.

The YF-102 entered a extensive testing program after its madden flight on October 24, 1953, in the first months of testing the YF-102 design was found to be limited to subsonic speeds. This problem was corrected by reducing drag using a design concept called area-rule; this feature gave the latter F-102s their characteristic “wasp-waist” or “Coke bottle” shape. The newly designed YF-102A dubbed the “Hot Rod” flew for the first time on December 20, 1954.

During 1957 the 317th FIS was named the Air Forces Best Fighter Squadron, by wining the 1956 Hughes Trophy, their excellent performance made the squadron a valuable commodity. In a effort to improve the defense of the Northern approaches of North America, personnel and aircraft of the 317th FIS and another F-102 squadron based in Michigan were relocated to Elmendorf & Ladd AFB, Alaska replacing five Alaskan Air Command Northrop F-89D Scorpion Squadrons. As the 317th completed its move to Alaska, the 64th FIS flying F-89's at Elmendorf stood up at McChord converting into the F-102.

In early 1966 the 64th was selected to move to Clark AB, in the Philippines to boost the F-102 inventory in the Pacific region, in preparation for their move, F-102's from the 64th FIS would receive in-flight refueling capability and a Southeast Asia camouflage scheme. In June 1966 during a project code named "Hot Spice", F-102's from the 64th, would make the flight to Clark AB and officially becoming a part of the Pacific Air Force's F-102 force. The 64th FIS "Scorpions" discontinued their alert commitments in Southeast Asia and was inactivated on 15 November 1969.

In all 43 Air Force squadrons flew the F-102 until 1973, ANG received its first Delta Dagger in 1960 with the last unit, the 199th FIS Hawaii ANG, retiring their last aircraft in October 1976. Ex USAF F-102s were also acquired by the Air Forces of Greece and Turkey.

In 1973, the USAF decided to convert surplus F-102As into low-cost, supersonic target drones that could simulate the performance of enemy aircraft in aerial combat in all 213 Daggers were converted in the “Pave Duce” program. The last PQM-102 was destroyed on June 30 1986. 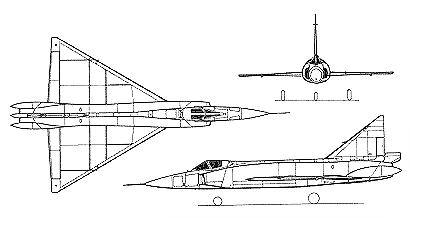 A F-106A Delta Dart from McChord's 318th FIS and a CFB Comox based CF-101B Voodoo from the 409th FS fly in formation over Mt. Rainer, WA with the Museum's F-102A (center) during it's assignment with the 64th FIS, Paine AFB, WA. The aircraft would later receive in-flight refueling capability in preparation for the types use in the Vietnam War.

Completed by Convair, a Division of the General Dynamics Corporation.